Can you beat the Joust challenge by reaching 100 million points?

Lon McDonald- Joust Master: The Thrill of Victory!  The Agony of Defeat?

Kansas City businessman, Lonnie McDonald is no stranger to success, in fact he bathes in it on a daily basis.  So what does a man need to do in order to challenge himself after a string of success in conquering the classic 1982 video game title, Joust?  How about playing against the aggressive computer generated enemies for over 50 hours on 1 single quarter?!  You might even call it the ultimate way to stretch your money in this tough economy.

Lon has been playing Joust since its’ debut in 1982 when the arcade was king to America’s youth.  Mastery of the challenging medieval simulation came quickly, culminating in an epic 24 hour game of Joust which garnered recognition by the manufacturer, Williams Electronics, that indeed Lon was the best player in the world.  A true Joust Champion arose from the ashes of the lava pit! 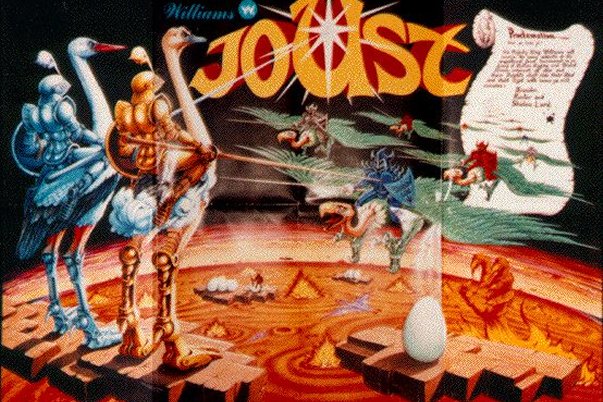 Fast forward to 2011, Mr. McDonald set out on a journey no one believed possible, (no , I don’t mean returning the ring of Sauren to the flaming depths of Mordor…) playing 100 different Joust machines around the United States.  By playing to 10 million points, a counter in the game code overloads which resets the score back to 0.  The game admits defeat and allows the player to enter a score of 9,999,999 in the High Score table.  100 machines, 10 million points, equating to a 1 Billion point conquest!  Ultimately, this project would take 2 years of untiring effort, and many thousands of miles of wear and tear on his vehicle.

During this epic 1 billion point conquest, Lon achieved a “World Record” by playing cooperatively with Steve Sanders.  Later, to honor the 30th anniversary of Joust’s release to the public, he broke the “World Record” on a Joust emulation for PCs called MAME.  This task being notable as he was the first person, since the mid-80s, to play a classic video game inside the original Twin Galaxies arcade location at 226 E. Main St., Ottumwa, Iowa.

Only 3 people in the history of competitive Joust play have ever achieved the coveted 100 million point mark in one sitting.  And one person in 1983, Christian Gingras, came very close at 98,565,550 points.

John McAllister exceeded the 100 million threshold in 2010.  His marathon statistics can be reviewed HERE

Saturday evening, May 5, 2013 (5:15pm central daylight time) Lon sat down at his immaculately restored Joust machine to test out a new stool.  Felt good.  Why not see about playing to 120 million points this weekend?  (Yep, he has a very supportive wife…I told you this guy was successful!)

The first 10 million points went by, the next 10 million, and next thing you know it is Monday evening.  He is still playing.  The normal person starts having mental deficits at 24 hours without sleep, the above average person can last 40 hours, yet Lon is still alert, focused and aware almost 50 hours after the start of the game! Amazing!

And that is exactly when life can turn bitter sweet- every true champion knows the sour taste of failure, the rich aroma of “humble pie.”  At 96 million Lon was going strong.  At 98 million, the rate of deaths were outpacing the rate of acquiring new lives.  And by 99 million the gauntlet was bearing down with ultimate pressure.  How does one survive after being awake well beyond the norm for a human being?  Can the devilish enemy dynamics being tirelessly generated by the computer code be outwitted?  …by 99,987,900 the anxious onlookers, in the virtual coliseum of “teh Internets,” had their answer.  The last ostrich had flown, the war of attrition was decided, and when the dust settled it was the game who won this battle.

In victory, one learns about being adored by the masses, BUT in defeat one learns the steely sharpness of wisdom.  Lest it be that wisdom is the kiln in which the true spirit of a champion is forged.

Lon with Steve Sanders and Walter Day, in Ottumwa, Iowa circa 2011, when they broke the 2-player “World Record.”

On May 23rd, 2013 Lon has one more chance at redemption against his sworn enemy and nemesis, Joust.  He will return to the birthplace of Joust, by playing one last game to 10 million points inside Chicago’s famed Williams Electronics location (WMS) at 3401 N. California Ave., Chicago, IL.  What may prove to be the billion point crowning victory against his foe of 31 years.  Devastating defeat of man over code?  Maybe.  Will he have the gumption to try defeating Joust at a 100 million point gauntlet, again? Maybe.  Will Joust be there to challenge him every moment of the way.  Guaranteed.

Watch Lonnie’s live streams over the internet at-  http://www.twitch.tv/lmcdonald111

Side-Note for the casual observer: